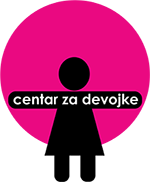 "Center for Girls" was founded 15th April 1998, on the initiative of two volunteers of “SOS helpline for women and children victims of violence.” The aim of its foundation was to improve the position of young women in society through their education and emancipation.

MISSION of the "Center for Girls" is empowerment of girls through education, activism and creativity.

VISION of the "Center for Girls" is empowered, confident, strong, safe girls, active in opposeing  patriarchy and make decisions about their lives with the possibility for a better position in society.

In the "Centre for Girls" in the past 16 years was implemented a lot of projects, which included SOS helpline, meeting place, workshops, lectures, psychological support, feminist-activist theater, festival. The three main topics which is worked on are: prevention of violence against girls, prevention of trafficking in girls and women's health. The target group of the "Center for Girls" are girls from 15 to 30 years. "Center for Girls" is a part of three networks: Network of Women Against Violence; Women in Black Network and AT Network Serbia.

From the 2002 we streamlined our work on education of girls in high schools. Till now we held workshops at 13 secondary schools in Nis and its surroundings we held 1.493 workshops with 20.913 participants, on the following topics: Assertiveness and Self-confidence; Prevention of Trafficking in Girls; Economic Empowerment of Girls; Forms of Violent Behavior: Bullying, Mobbing and Stoking; Economic Violence; Prevention of Violence Against Girls; Women's Health and Sexuality; The Prevention of Anorexia and Bulimia. Workshops with these issues, as well as new ones that arise from the need of girls, are being carried out continuously until today.

Since 2011 the work of the "Center for Girls" includes expression through the medium of theater.

"The Vagina Monologues" is awarded piece of Eve Ensler, performed many times, in different places (from Broadway to the Yugoslav Drama Theatre and Atelje 212), always with the same message and that is to support the fight against violence against women and to explain that the vagina except reason have a language with which can talk about her surroundings or interior. "The Vagina Monologues“ is based on more than 200 true stories of women of different age and social groups from all over the world.

In 2012 the activists of "Center for Girls" made a new theatre play "The Good Body", which was played at festivals: PitchWise in Sarajevo, FemiNis in Nis and the Festival of female friendship, activism, art and solidarity in Tutin, as well as in Kovacica, Zenica, Leskovac, Skopje, Pljevlja and Nis. "The Good Body" was performed 13 times and about 1 200 people watched it.

The theatre play "The Good Body" was made according to the book of Eve Ensler deals with women's issues, which transcend time, civilizational and continental barriers. With these issues deals women of all ages, in all parts of the world-it is about universal and everlasting attitude toward your own body. Who creates the standards of beauty, how education, social norms and expectations influence the creation of our attitude toward our own body?

This year, 2014, within feminist-activist theater of the  "Center for Girls," prepared a new theater play, called "Waiting Room", made according to the text of Jasmine Tesanovic "The Italian Comedy: The Importance of Being a Mother." The story is about the relationship between mothers and daughters, women and men, about the role of the mother, the support, the women's health, about abortion, childbirth, the treatment of pregnant women in health care, the attitude of the society. 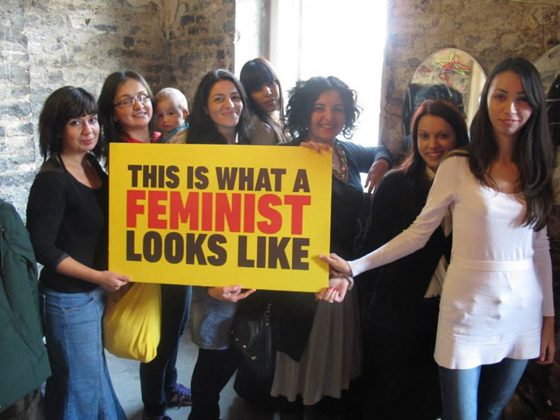 From 2010-2014 in cooperation with "Women's Space" we organized FemiNis - festival of women's activism and art four times. Through FemiNis we wanted to draw the attention of our citizens, as well as the wider community, not just about the position of women in our society, but also about the rich feminist theory and courageous women's activism in this area, that exists for a very long time. It is important to us to bring closer the idea of feminism and present all that is current at the feminist scene, or all that concerns gender theory and the status of women to those who live in southern Serbia.

Within FemiNis festival, we have organized exhibitions, workshops, concerts, film screenings, panel discussions, performances, theatre play, book promotions and spent a lot of time socializing with the guests of the festival from the region.

From 2014 we are launching ArtFemine festival - Festival of feminist activism and art.

With ArtFemine festival we are opening feminist space for networking, empowerment, agency, association of activists, theorists, artists, fellow citizens and guests from the country and the region. A particularly important aspect to which we will pay attention within the ArtFemine festival is connecting and empowering of feminist offspring in the country and the region. We think that festival is very important, because in Nis there isn’t a promoting of women's art, activism and creativity.

The first ArtFemine festival will last this year four days, from 3rd till 6th July 2014.
The theme of the first ArtFemine festival is "Women and the Media." We would like to shed light on this topic from several angles: how the women are shown in the media, which media are available to women, wath are the new forms of media communication in feminism, as well as wath is the position of women working in the media.

Within the festival we planned the following activities: meeting of young feminists in the region, two workshops, lecture, panel, street action, theater play, female party and all activities are related to the theme of the festival.

For the second time, in the last week of May, activists of the "Center for Girls," organize Week of Women's Health.

After completing the Training for Work on SOS Helpline in December 2013 and January and February 2014, 25th February, SOS helpline for girls started to work. SOS hotline for girls is for girls we want to hear, empower, to inform them about their rights, about the violence against girls and women, about trafficking in human/girls. SOS hotline is opened from Tuesday through Saturday during the period from 5 to 8pm.