We opened an exhibition called "Boys don't cry, and girls are pretty" in the gallery of the Nis Cultural Center. At the exhibition, you can see the works created at the VI Feminist Art Colony, the works will be exhibited until April 19. The opening was covered by City Radio.

On the occasion of International Women's Day, we organized a street action in which activists performed a dance performance with the song "Break the chain" as part of the global campaign "One Billion Rises Against Violence Against Women". 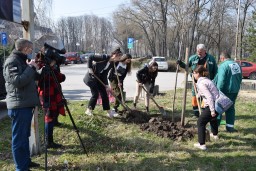 Planting of the Japanese cherry trees in Nis was a part of the "One Billion Rising" global campaign to end rape and sexual violence against women. In 2021 this campaign dedicated itself to preserving Mother Earth under the slogan "One Billion Rising 2021: Rising Gardens".

Women's health and sexuality is one of the three main subjects that the Center for Girls has been dealing with for many years. For the European Cervical Cancer Prevention Week, Center for Girls activists handed out informative flyers to their fellow citizens and reminded them of the importance of regular gynecologist visits and self-care.